The first recognized case of Legionnaires’ disease was an outbreak in 1976 at an American Legion convention in a Philadelphia hotel. 182 people contracted the disease and 29 died. Sadly, this outbreak was how the disease came to be called “Legionnaires.” The source of the outbreak was never definitively determined; however, a high-risk population was identified as people over 50 years old and heavy cigarette smokers. (+)

Following the initial outbreak of 133 cases in the Bronx, New York City’s health commissioner ordered that only cooling towers be tested and treated. Immediately after all cooling towers were disinfected as required, another outbreak occurred; sickening 13 people in a nearby Bronx neighborhood. A third outbreak of four cases at a housing complex, during this same time frame and in the same neighborhood as the initial outbreak, was attributed to the hot water system and treated. (+) A more comprehensive approach would have been to test and treat all possible sources of contamination following the first outbreak.

The city of Flint, MI switched water sources from Lake Huron to the Flint River and saw a spike in Legionnaires’ disease—87 cases were reported between April 2014 and October 2015. Recent studies show that Legionella thrives on corrosion in piping systems. Drinking water experts believe that, because the proper anti-corrosion treatments were not used, a dramatic increase in pipe corrosion disrupted existing biofilms and leached iron into the water. This resulted in the creation of a more hospitable environment for Legionella and allowed the bacteria to enter individual homes through the potable water system where it could multiply in the hot and cold water systems. (+)

Nine people were sickened with Legionnaires’ disease at a hospital in Birmingham, Alabama. The oncology ward, where patients undergoing cancer treatment are at increased risk for contracting infections, was found to be the site of the infections. Legionella was found in the hospital’s water system and the bacteria was controlled by flushing the water system with 160°F water. (+)

A geographic cluster of Legionnaires’ cases occurred in New Jersey from 2003 to 2012. Upon investigation, no potential airborne sources of Legionella in the area could be identified. Investigators realized that the geriatric center, the senior high-rise residence and several private homes where patients resided, were all in proximity to a community water storage tank. This finding led to an investigation of water quality in the area. The investigation concluded there were low chlorine levels in the water supply, stagnant water in the storage tank, and the absence of a flushing program for water mains, all of which created conditions conducive to Legionella growth. (+)

A decorative lobby fountain and a spa in a Chicago hotel were found to be the source of Legionella during a 2012 outbreak that took the lives of three people. To help prevent future outbreaks, the fountain was removed and portions of the spa were closed after the investigation concluded. (+)

Around 200 people fell ill with Pontiac fever (see FAQ)—a four with Legionnaires’ disease—after attending a party at a private home in Los Angeles. The sources of the outbreak has been reported as the home’s hot tub and a fog machine. (+)

During the summer of 2011, four cases of Legionnaires’ disease were reported at a resort on the Las Vegas Strip. High levels of Legionella bacteria were detected in the water supply to several guest rooms. (+)

Eight people contracted Legionnaires’ disease in a Milwaukee hospital after inhaling mist from a decorative water feature. All eight either had pre-existing medical conditions or other factors that increased their risks of getting Legionnaires’ disease. Fortunately, all eight victims survived. (+)

Atlanta’s largest hospital was the site of a Legionnaires’ outbreak that sickened four people. Over 300 samples were taken from water sources all over the building, but it was the patients’ bathrooms where the Legionella bacteria was found. (+)

A cluster of Legionnaires’ cases were reported among a seemingly random group of people. Investigators were able to determine that 83 percent of the patients recalled eating at the same restaurant. A small fountain was sampled and found to contain very high levels of Legionella bacteria that matched samples taken from the patients. (+)

In just over one month, 33 people were sickened with Legionnaires’ diseases in Bogalusa, Louisiana. The source for the outbreak was determined to be produce misters in a grocery store. (+) 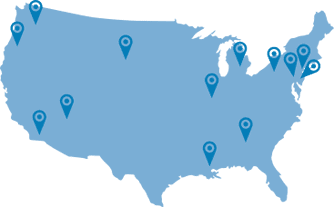 These notable Legionnaires’ disease outbreaks illustrate the diverse sources where Legionella bacteria can be found. They demonstrate the importance of testing all associated water systems to prevent future cases from developing. Legionella can live in small colonies at various locations within a building’s water system. Unfortunately, it’s often the case that water in only one water system, such as a cooling tower, will be tested. Even if a small unit measure of Legionella is found in a cooling tower, the investigation into the source concludes.
This shortsighted approach can actually increase risk because other potential sources remain untested and untreated. Studies since the early 1980’s have concluded the potable water supply and drinking water system most often harbor the bacteria and enable its transmission through multiple outlet points including showers, faucets, decorative fountains, ice machines, misters and evaporative cooling systems.