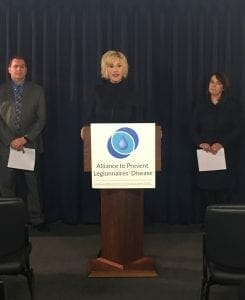 The Alliance joins with renowned environmental and public health activist Erin Brockovich to fight for clean water in New York.

ALBANY (January 24, 2017)—Today, the Alliance to Prevent Legionnaires’ Disease joined forces with public health and environmental advocate Erin Brockovich and the president of Allergy & Asthma Network (AAN) Tonya Winders to call on lawmakers and health officials to work towards real, effective solutions to New York’s escalating Legionella and Legionnaires’ disease crisis. Misguided regulations for combating the disease were implemented after the 2015 South Bronx outbreak, and unfortunately—though predictably—instances of Legionnaires’ have continued to climb across the state since the regulations went into effect.

“The data paints a grim picture: There is a serious public water crisis brewing in New York,” said Erin Brockovich. “New Yorkers are needlessly dying from their public water systems, and the stark truth is that more people will get seriously ill and die if the state’s current regulations to prevent Legionnaires’ disease are not changed to address the real issues that exist with the water supply.”

“Legionnaires’ presents grave risks to all New Yorkers, but the threat to those with asthma, the elderly, and those with compromised immune systems is magnified,” said Tonya Winders, president of AAN. “Legionnaires’ is a lung disease, and the people for whom we advocate are at the greatest risk—especially those who reside in the Bronx where the rate of asthma is approximately three times higher than the rest of the nation. It’s no exaggeration to say that their lives depend on New York’s broken regulations being changed.”

“There is a real solution to this growing crisis, but it requires New York City and State officials to change the regulations to address waterborne pathogens in the public water supply,” said Daryn Cline, spokesperson for the Alliance to Prevent Legionnaires’ Disease. “The guidelines for mediation are available in the report we released, including information made available by the Centers for Disease Control and similar organizations. We urge our health and elected officials to amend their regulations before more people senselessly contract this preventable disease.”

Governor Cuomo and the New York State Senate recently proposed significant spending plans to invest in various water infrastructure projects around the state. The Alliance applauds these proposals and calls for a portion of this funding to be dedicated to address the variety of waterborne pathogens, like Legionella, to ensure New Yorkers are protected from the serious illnesses they cause.

The Alliance to Prevent Legionnaires’ Disease has been actively rallying against the regulations imposed across New York State since their inception. The group is urging concerned New Yorkers statewide to sign a petition, directed at New York State and New York City officials, to chart a new path for Legionnaires’ disease prevention, one that supports a real, effective solution. The petition and the report released today are available on the Alliance’s website, www.preventlegionnaries.org and its social media pages.